The biggest advantage of the pull-wire throttle is that the throttle response is direct and sensitive. Because as long as you step on the accelerator, the throttle opening will be in place instantly. Therefore, a car with a pull-string throttle makes you feel that the engine responds quickly.

However, the shortcomings of the pull-wire throttle are also obvious. The biggest shortcoming is the inaccurate control of the air-fuel ratio when the throttle is changed, and the inaccurate enrichment compensation when the accelerator is stepped on. As a result, emissions and fuel consumption cannot be broken. Nowadays, emission requirements are getting higher and higher, so the cable-type throttle can only be forced to be laid off. It is foreseeable that the future car will basically not see the cable-type throttle. 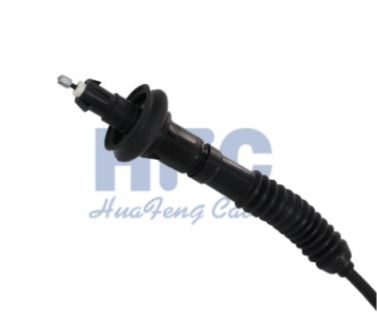 In addition, the engine control system cannot directly control the opening of the cable-type throttle, and therefore cannot fully control the power of the engine. Therefore, functions such as the traction control system, adaptive cruise, and automatic refueling to reduce frustration during manual gear shifting cannot be achieved. accomplish.

Different from the motorbike throttle cable, the accelerator pedal of the cable-type throttle is heavier. The car accelerator cable is not a disadvantage for the old driver. The custom automotive throttle cable can even provide a more real and direct foot feeling. However, it is not very friendly to novices, especially when starting and shifting gears, the original oil separation coordination is not proficient, and the accelerator is too heavy, it is easy to have insufficient power when stepping on the light, and the phenomenon of rushing forward when the car is stepped on.

The electronic throttle is not directly controlled by the accelerator pedal. When we step on the accelerator, the pedal only generates a position signal. The ECU judges the driver's intention based on the pedal signal, and then controls the throttle action. In this way, the intake air volume and fuel injection volume can be controlled more accurately, and the emission level can be improved. At the same time, because the ECU can directly control the throttle opening, it can achieve more functions.

Introduction to the service life of auto parts

The performance of a broken car clutch

The difference between motorcycle brake and car brake system